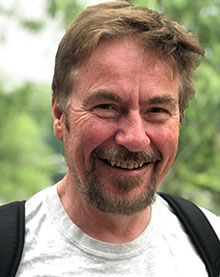 John Beaton’s poetry is metrical and has been widely published in media as diverse as Able Muse and Gray’s Sporting Journal. He wrote a monthly poetry page for several years for the magazine Eyes on BC and served for four years as moderator of one of the internet’s most reputable poetry workshops, Eratosphere. He recites his poems from memory as a spoken word performer and a poet member of the band Celtic Chaos. His poetry has won several awards, including the 2015 String Poet Prize and the 2012 Able Muse Write Prize for Poetry. He is a retired actuary who was raised in the Scottish Highlands and lives in Qualicum Beach on Vancouver Island, Canada.

Signup for book & other news!